A unique Mujib Borsho gift of Model mosques across the country 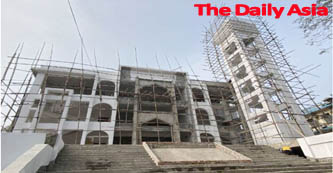 The government is setting up model mosques that will serve as centres of excellence for Islamic knowledge, research and values as gifts for the people in Mujib Borsho, reports UNB.

Some 170 model mosques-cum-Islamic cultural centres out of proposed 560 will be inaugurated in the Mujib Borsho – birth centenary celebration of Bangladesh’s founding father Bangabandhu Sheikh Mujibur Rahman – at the district and upazila levels.

Construction work of the mosques is going on in full swing. Bangladesh is one of the largest Muslim-populated countries in the world.

The main objectives of the model mosque project include spreading Islamic fraternity, real Islamic values and practices, creating strong Islamic infrastructures for prayers of both men and women, providing religious teaching and trainings, enhancing public awareness against social diseases including terrorism and violence against women.

The government is implementing ‘Establishing 560 model mosque and Islamic cultural centres project’ with own fund to fulfill the electoral pledge Prime Minister Sheikh Hasina made before the 2014 parliamentary polls to build a model mosques in every district and upazila.

The total estimated cost of the (1st revised) project is Tk 8,722 crore.

Constructing so many mosques at a time is an unprecedented move, government officials said.

“A total of 170 model mosques and Islamic cultural centres will be inaugurated in Mujib Borsho,” said Project Director Engineer Md Nazibar Rahman. Fifty of them will be opened by the Prime Minister in April, while 60 others by September and another 60 at the end of Mujib Borsho, he said adding that the progress of the physical construction works of the project is 32 percent.

In Sirajganj and Rangpur, about 90 percent of the construction works of the two mosques has been completed. Sirajganj Deputy Commissioner Dr Farook Ahmed said the construction of district model mosque and another one out of 10 in the district could be completed by early March.

Alongside different religious practices, many social activities like mass education will also be run in the model mosques-cum-Islamic centres, he said.

Each model mosque is being constructed on a 40-decimal plot under three categories.

Each spectacular mosque is costing Tk 15.62 crore in district town or city area, while Tk 13.52 crore in upazila level and Tk 13.61 crore in the coastal area.

What are model mosques offering?

Every model mosque-cum-Islamic cultural centre will have separate prayers halls and ablution places for men and women. They will have Islamic library, Islamic book sale corner, training centres for hajj aspirants and Imams, Hifzkhana (where the holy Quran is taught and memorised by students).

Another significant addition to the mosques is autism corner and guest rooms for tourists (both local and foreign). They will also have arrangements for Islamic research and religious activities, and funeral activities.

There will be facilities for educating children and the mass people. These mosques will offer housing facilities for Imams and Muezzins and the offices for its staff. One of the most interesting additions is the toilet facilities for the physically challenged devotees.

“We’re very glad that model mosques are being constructed at the district and upazila levels, which will help spread Islamic values and knowledge in the society,” he said.