The body of a baby girl was recovered in Kahalu 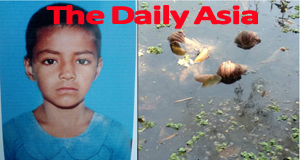 Police recovered the body of a baby girl named Jannati (9) from a pond in Shahragari Pallapara of Kahalu upazila of Bogra around 2pm on Monday and sent it to the morgue. Jannati is the daughter of Shamsul Haque, a hotel worker in the mentioned village. Jannati’s uncle Chalima, former UP member Matiur Rahman Sanju and other villagers have killed the baby girl after raping her.

According to the baby girl’s family, Jannati was seen playing last Sunday afternoon. He did not return home even after evening and could not be found after much searching. Reporting the matter to the police the next day, on Monday afternoon, the police searched various jungles and ponds in Pallapara and recovered Jannati’s body from a local pond. Soon after the body was recovered, Bogra Additional Superintendent of Police (Crime) Abdur Rashid visited the spot. Kahalu Police Station Officer-in-Charge Mohammad Zia Latiful Islam said it was not clear how the girl died until the autopsy report was received. He added that preparations are underway to file a case after hearing the details from the family members.