Volunteer League for Public Relations of Boats in Thakurgaon 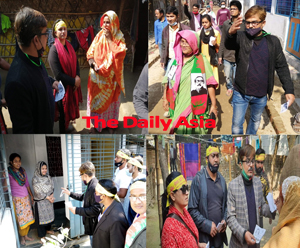 Bangladesh Awami Swechchhasebakalig Thakurgaon district is working day and night to ensure the victory of Anjuman Ara Bonya in the 14th municipal election.

On this occasion, under the leadership of District Volunteer League President Nazmul Huda Shah Apollo, the leaders and workers of the Volunteer League are going to the doorsteps of the common people in wards 1 and 6 of the municipality to seek votes.

The president of the district volunteer league said the way the country is developing under the leadership of Prime Minister Sheikh Hasina, the daughter of the father of the nation, has not happened during the tenure of any post-independence government. Therefore, in order to maintain the trend of development, Thakurgaon Municipality needs the boat symbol nominated by the Prime Minister.

He urged the general voters to cast their votes on the 14th.