100% Shaheed Minar in schools in Dhunte for Mujib Year 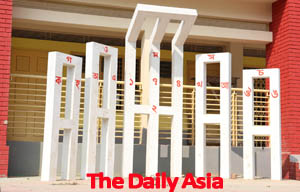 Since its establishment, there was no permanent Shaheed Minar in the government primary schools of Bogra’s Dhunat upazila. As a result, the students could not pay homage to the martyrs on various national days including International Mother Language Day. In some of these educational institutions, the day was celebrated by constructing a temporary Shaheed Minar with banana trees or bamboo and wood. Again in many institutions the day was celebrated only by hoisting the flag.

It is learned that there are 203 government primary schools in this upazila. These schools did not have Shaheed Minar. In the year of Mujib, Shaheed Minar has been constructed in 100% of the educational institutions with public and private funding at the initiative of the Upazila Education Department. The teachers of each school were inspired in this work. The newly constructed Shaheed Minar was inaugurated on December 16 by Alhaj Habibur Rahman MP.

The Shaheed Minar, the symbol of the language of 52, is now adorned in the courtyard of every school. Teachers, students and parents are happy with the construction of this Shaheed Minar. This time, on the International Mother Language Day, students will be able to pay their first respects to the martyrs with flowers at the Shaheed Minar of their own school. The Shaheed Minar is now in response to the soaking of the flowers in the hands of the tender-hearted students.

Mahbubur Rahman, head of Sahajipur Government Primary School in the upazila, said the construction of Shaheed Minar has been done on the school premises with the money received from the school renovation sector and local cooperation.

Dhunat Upazila Education Officer (TO) Ferdousi Begum said, “I have cherished the dreams of freedom fighters and language martyrs in my heart since childhood.” As a result, I feel blessed to be able to implement the initiative of constructing Shaheed Minar in every school premises for the children of Komalmati. In the hearts of the newly blossomed flowers, the language can only respect the martyrs and practice the mother tongue in building a beautiful future Bangladesh.

Dhunat Upazila Nirbahi Officer (UNO) Sanjay Kumar Mahanta said that if the emotions of Bengalis can be used positively, then any evil force is bound to bow down to him. It is our initiative to inspire the new generation with the spirit of twenty-one and patriotism from this thought. Which has been implemented with the spontaneous cooperation of the people of Dhunta.