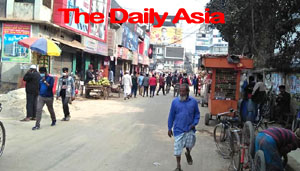 On Sunday (February 8), a five-day rally was held in Bogra Municipality to issue trade licenses for autorickshaws, vans and easybikes, vandalize autorickshaws, stop physical and mental torture of workers, stop parking of vehicles including motorcycles on the roads and vacate sidewalks. Done. The strike was called by the Autorickshaw-Van Workers and Owners Struggle Council.

Convener of Sangram Parishad Kabir Hossain and General Secretary Abdul Hai congratulated the workers’ owners and the people of Bogra for making the strike a success.

They said if the 5 points of Sangram Parishad are not implemented within the next one month, a memorandum will be issued on the 10th working day of the newly elected mayor in the upcoming municipal elections. Even after that, if the demand is not met, the siege of the municipality will be carried out.

The leaders called upon the people of all walks of life, including workers and employers, to make the struggle committee’s program a success.