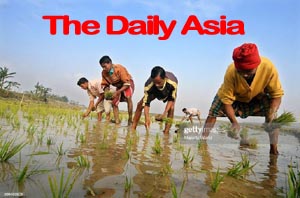 Farmers in the northern district are passing busy time for planting Boro seedlings, ignoring the biting cold during the peak cultivation season.

The growers, however, started transplanting the seedlings earlier to avert possible nor’ wester and hailstorm prior to harvest.

“Farm labourers demand high wages for transplanting seedlings as they have to work in cold weather. They cannot stay in the icy cold water in fields for long hours, and so, more labourers are needed for the work,” said Lokman Hossain, a farmer of Magurartair village of Sherpur upazila.

Solvent farmers set irrigation pumps at their own cost, but the small farmers and sharecroppers have to purchase irrigation water from pump owners on condition of paying one fourth of the crop after its harvest, said locals.

“Last year’s Boro price was Tk 700 to 800 per maund while the price is above Tk 1200 now. And so, growers get very little benefit from Boro cultivation,” he said.

If the government arranges purchase of food grains directly from farmers, they would get fair price of crops including Boro, he added.

“Farmers are eager to start Boro farming earlier to get high yield, as late farming of the crop often leads to lesser yield. Besides, there is chance of natural disasters like nor’ wester and hailstorm in summer,” said Kabir Uddin, another grower of the same village.

In Sherpur upazila, 27,000 hectares of land have been targeted under Boro cultivation this season, which may more or less after  schedule time said Razia Sultana, Upazila Agriculture Extension  Officer.