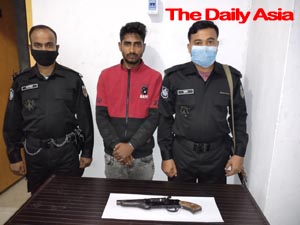 On Saturday (February 6, 2021) at 05.20 pm, based on a tip-off, a vigilante expedition team of RAB-12 Special Company led by Assistant Company Commander Muhammad Mohiuddin Miraj, Special Company of Atra Battalion, conducted a special expedition to the market in Pabna district. In the raid at the entrance of Chatur Bazar in front of Biswas Plaza, 01 arms dealer along with 1 shooter gun was arrested. Besides, two mobile phones used for buying and selling arms were also seized from him.

The arrested arms dealer had filed a case against him under sections 19-A and 19 (f) of the Arms Act, 1878 at Santhia police station in Pabna district. He was handed over to the police station along with the recovered weapons.