Farmers, including small traders in Gaibandha affected by corona, are not getting incentive loan facility 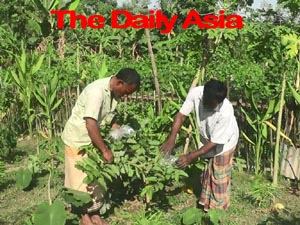 Farmers including small traders of Gaibandha affected by Karona are not getting incentive loan facility. They complained that the loan facility was not being given for various reasons even though there were government directives. Although it has been said to give loans to the victims on easy terms, day after day the banks are not getting loans. The locals demanded that the government take initiative to distribute incentive package loans in the district on easy terms.

Amir Ali is a successful farmer from Putimari village in Saghata upazila of Gaibandha. Bangabandhu Krishi Padak in the hands of the Prime Minister has aroused response by cultivating different crops. Amir Ali is also a model farmer in Malta. His farm was destroyed in the catastrophic floods of 2019. Although he started again by borrowing in various ways, he became destitute due to the loss of crops in the field due to the touch of corona.

Despite seeing a glimmer of hope in the announcement of the government’s incentive loan facility in Corona, the successful farmer Amir Ali, who received the national award from the banks and agriculture offices. He said that for a long time, the horse has not been used for various reasons, and this low interest loan facility for standing on horseback. Despite receiving the national award, I did not get the incentive loan facility. Then who is Pelota?
In the same situation, one of the flower growers of the district to meet the demand of flowers is Mr. Liton Chandra, a flower grower of Dharmapur area of ​​Sundarganj upazila. He recommended the local agriculture office, Member of Parliament, Deputy Speaker to repay his loan but the loan did not match. The local agricultural bank is not giving him a loan on various pretexts.

Amir Ali and Liton are in the same situation as most of the entrepreneurs in the district including agriculture, flowers, fish, cottages, small businesses. At this time in Corona, the government gives utmost importance to the agricultural sector so that there is no food crisis in the country and no cultivable land remains uncultivated. For this, the government announced an incentive fund of five thousand crore rupees for the farmers. In addition, the interest rate on all loans in the grain sector is set at 4 percent for farmers. On the other hand, incentive loans of Tk 20,000 crore were announced in the cottage, micro, small and medium sectors to address the losses.

Farmers who did not get loan facility in the district said that the farmers and small traders of the district are not getting the benefits of the incentive package announced by the government to revive the economy of the country. Day after day, the banks are making various excuses. The implementation of the incentive package announced to protect various sectors is very sad in this district.

Deputy Director of Gaibandha Agriculture Extension Department, Bid Masudur Rahman, said that although it was recommended to provide loans to the banks to calculate the losses of the affected farmers, many farmers were not being given loans. They are running around in the agriculture office without getting a loan from the bank. The top official of the district agriculture department said that they need to provide emergency loans on easy terms.
Abdul Mannan, zonal manager of Janata Bank, who is in charge of the District Debt Distribution Coordinating Committee, declined to comment on the allegations.

However, the demand of Krishi Bank has been distributed in the district. Gaibandha Krishi Bank zonal manager Md Sarwar Hossain said those who did not get loans did not have the required documents.