Demonstration in protest of Tarique’s punishment held in Sherpur 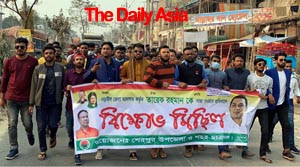 Jatiotabadi Chhatra Dal has staged a procession under Sherpur upazila of Bogura district to protest against the verdict in a defamation case against BNP acting chairman Tarique Rahman.

A protest procession was taken out on Saturday (February 6) at 5:15 pm at the initiative of the Upazila and Municipality Chhatra Dal. The procession encircled important roads of the town.

At the rally, BNP acting chairman Tarique Rahman was sentenced to two years in prison in a case filed by an Awami League leader in Narail. At the same time, calling the present government a fascist, the speakers said that Sheikh Hasina is in power by force without a vote.  In this way you will not be able to stay in power for long. In the face of mass movement, the Chhatra Dal leaders warned that this government will be dismissed soon.