Green, healthy plants of OFSP show the growers good yield of the variety 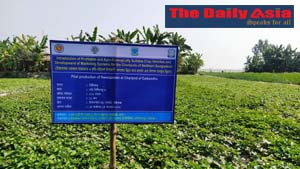 GAIBANDHA, FEB 06, 2021(BSS)-Plants of orange fleshed sweet potato (OFSP), one of the crops of Bangladesh Agricultural Research Institute(BARI) released improved varieties farmed by the char and river basin farmers of the district grew well on the char land last year show the farmers good yield against the variety during the current season.

Officials sources said, BARI set up an office in the name of On Farm Research Division (OFRD)in the district town in 2016-2017 fiscal year with the financial support of National Agriculture Technology and Bangladesh Agriculture Research Council aimed at making the BARI released improved varieties to the farmers’ level more popular and helping the growers earn economic profit by producing and selling the varieties to change their lots economically.

Accordingly, the scientists led by principal scientific officer Dr. Al Mahmud of OFRD here motivated the farmers of chars and Brahmaputra river basin areas of the district to farm the varieties including OFSP one to attain the cherished goals of the BARI.

In response 21farmers residing on the chars and river basin areas of the district farmed the variety on 21 bighas of sandy char land last year. The plants of the variety which grew well give the growers desired output against the variety.

Rafiqul Islam, a grower of chinirptal char under Shaghataupazila of the district said, he and other fellow growers are so much happy to see the crop land of OFSP as the variety grew well on the land and for this, they are expecting desired yield against the variety during the current season.

They are eagerly waiting for the harvest of the variety, he also said.

Hearing this, many farmers are coming from far flung areas of the district to have a glimpse of the OFSP CROP crop land and showing their interest to farm the variety in next seasons after visiting the crop land, he added.

PSO of OFRD here Dr. Abdullah Al Mahmud told the Daily Asia that a number of enthusiastic farmers had been selected to farm the variety and as per the advices of the office scientists they farmed the variety on their sandy char land for the first time on pilot and trial basis.

Earlier, the selected farmers were provided with need base training and vines (seedlings) from the office for the cultivation of the variety successfully, he also said.

If the growers are satisfied and get desired output against the crop this season, necessary measures would be taken for commercial production of the the variety by the farmers on their vast tracts of unused sandy char land of the district in coming season., he added.