Prayer for the cure blessings of MP’s wife 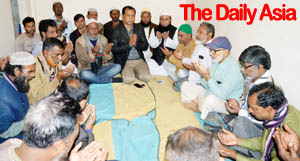 A special prayer mahfil has been held for the recovery of Khadija Habib, wife of Alhaj Habibur Rahman, Member of Parliament for Bogra-5 constituency. The prayer mahfil was organized by Gosaibari Union Awami League of Dhunat Upazila.

A prayer and milad mahfil was held at the private office of Union Awami League organizing secretary Liakat Ali Liton at Gosaibari Bazar of the upazila at 10am on Friday.