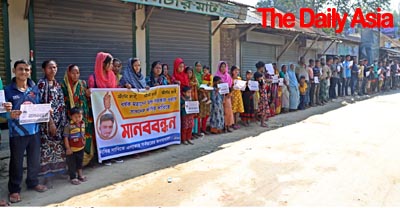 In Bogra’s Dhunat Upazila, locals have organized a human chain and protest rally demanding the execution of the rapist. The program was held in the Penchibari Bazar area of ​​the upazila from 10 am to 12 noon on Friday.

Shah Alam, Subhash Chandra, Al Imran, Asmat Ali and Sushil Chandra spoke in the human chain. Speakers said that the family of rapist Mahadev alias Sadhan is involved in various conspiracies over the case. We stand up for the poor college student of the rape victim village. We demand the execution of the rapist.

According to the locals, on November 4, 2020, Mahadev alias Sadhan Chandra Sarkar, son of Nipendra Nath Sarkar of Haldar Para in Penchibari village, raped a college student in the same neighborhood. At that time, the villagers arrested the rapist Mahadev from the spot by shouting at the student. Later, the victim’s father filed a rape case with the Dhunat police station.

Police arrested the rapist from the spot and sent him to jail. The rapist Mahadev is currently in Bogra jail. A chargesheet has been filed against the rapist Mahadev from Dhunat police station. Locals rallied in the Shupenchibari market area demanding the death sentence of the rapist. The traders of Penchibari Bazar and people of different professions of the area took part in the human chain.