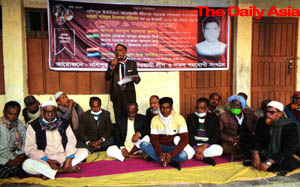 A mourning and remembrance meeting was held at the local Bagbari High School ground on the initiative of Union Awami League and allied organizations on the death of Shahidul Islam Shahid Mandal, former general secretary of Nashipur Union Awami League in Gabtali, Bogra.