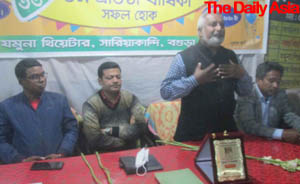 Actor and heroic freedom fighter Ahsanul Haque Minu Tarafdar has been given a reception at the Jamuna Theater in Sariakandi, Bogra as he was elected a member of the sub-committee on cultural affairs of the Bangladesh Awami League.

On the occasion, a discussion meeting was held on Thursday night under the chairmanship of Khairul Alam, President of Jamuna Theater and Zahurul Islam Badshah, former General Secretary.

At the end of the discussion, the artists of Jamuna Theater performed music.