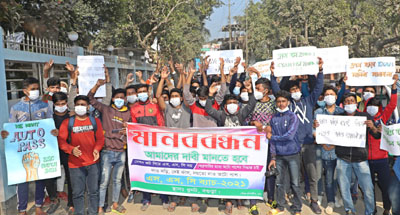 Students of SSC 2021 batch in Dhunat upazila of Bogura have staged a protest rally and human chain program demanding auto pass. Students staged demonstrations on the city’s main roads from 10 a.m. to 11 a.m. Thursday. Later, they blocked the road in Charmatha area of ​​the city and held human chains and rallies.

Among the SSC candidates, Jisanul Habib, Sohag Islam, Jobayer Sarkar, Ruhul Amin, Khairul Islam and Abdullah Al Naeem addressed the gathering. In their statement, they said that we will not take the SSC exam at the risk of corona. There is a risk of session clutter if the test is taken late. Therefore, the examinees want the announcement of autopash by February.