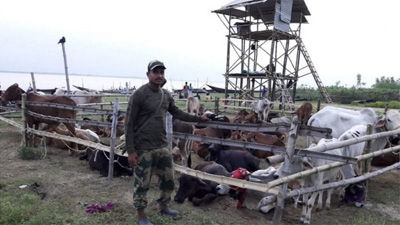 He wrote that top officials from the South Bengal border headquarters had instructed company commanders and post commanders to co-operate with the traffickers.

Despite such specific allegations, why no disciplinary action was taken then? There is a surveillance department inside the force, there are senior officers. Why were they blindfolded?

Answering this question, Pankaj Kumar Singh said, “I don’t know about it, because I joined the force in 2020. If the Director General knew about it in 2016, he must have taken some action, which I don’t know.”

Kiriti Roy, head of Masum, a human rights group working in the India-Bangladesh border region, said they also had ample evidence that cattle-people-banned drugs were smuggled across the border with the help of the BSF.

Mr. According to the verdict, this would not have been possible without the involvement of top officials

“We have ample evidence to show that it is not possible to smuggle anything across the border without the help of a section of the BSF. I do not blame the whole force, but a class of soldiers and officers are definitely involved in the smuggling ring.”

“They are accompanied by the local police, the political parties – they too. One of them, who voted for the BJP, wrote to the then Home Minister Rajnath Singh on the party pad about how the BSF was smuggling across the border,” he said. Judgment.

He added, “But no action has been taken. There are doubts as to how much action will be taken, or how long the investigation will last. State and central level political leaders are also involved in this trafficking ring.”

According to BSF sources, from 2014 to 2019 – in these five years, most cows have been smuggled across the South Bengal border. However, the statistics given by the BSF at that time claimed that they had taken steps to stop the smuggling of cattle and that a large number of cattle were being detained by the members of the force.