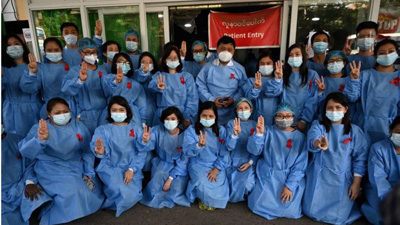 The third day of the military coup in Myanmar has seen gradual protests from various quarters. Health workers in the country’s major cities, including doctors and physicians, have peacefully declared their opposition to the military rule.

Many have quit their jobs as part of protests against military rule. Many doctors have decided not to consider the patient, but have said they will not recognize the new cabinet of the junta government. At the same time, they have announced a program called Red Ribbon Movement Myanmar 2020.

Residents of Yangon have also expressed solidarity with the program, both online and offline. They have reddened their profile picture or saluted with three fingers. This program is primarily a business and service avoidance program related to the military.

Residents also protested by lighting candles, cooking pots and car horns at night. Traditionally, metal buckets have been used as symbols to drive away Satan’s spirits.