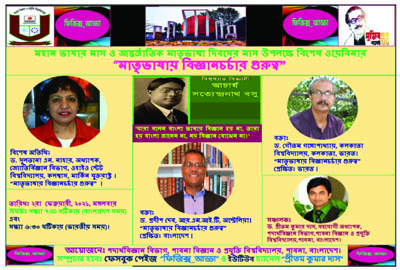 Normal activities of all educational institutions, including universities, have been shut down during the Corona epidemic. But Pretam Kumar Das is a very conscientious teacher who is a teacher dedicated to the physics department of Pabna University of Science and Technology (PUST). He has been able to generalise the extraordinary.

He has been organising international physics webinars with eminent physicists from different countries of the world to attract the students of Pabna University of Science and Technology and make physics popular among the students.

According to physicists in Bangladesh, the current webinars will play an important role in the higher education of physics students at different levels of physics.

February is the month of freedom, emancipation, equality, democracy of the great language movement.  In this month of 1952, the brave youths of Bengal, by shedding their blood, established the right to mother tongue as a universal fundamental right.

On 21st February 1952, Salam, Jabbar, Shafique, Barkat and Rafique and many others joined the unruly movement to demand the state language Bengal. The Bengali nation gets the status of mother tongue through their blood.  Later, the Bengali independence movement started on the path of this achievement and as a result, Bangladesh gained an independent-sovereign country through armed struggle against the Pakistani aggressors for 9 months in 1971.

Two special webinars have been completed by the Department of Physics, Pabna University of Science and Technology on the occasion of Great Language Month and International Mother Language Day. A webinar on science research and practice in Mother Tongue was held on 2nd February at 7pm. Where Gautam Gangopadhyay, Calcutta University, Dr. Pradeep Dev, RMIT, Australia were present as speakers.

And Dr. Sultana N Nahar, Professor, Department of Astronomy, Ohio State University, Columbus, USA. The speakers highlighted the importance of mother tongue in the practice of science and spoke in many directions were present as special guests.

And on February 1st, another special webinar was held on the occasion of the Great Language Month and the International Mother Language Day on “Statistical Inquiry” where Dr. Rahmatullah Emon, Professor, Department of Mathematical Sciences, Ball State University, Indiana, USA spoke were special gusts.

The world’s best physicists have already spoken at these international physics webinars, and many more famous physicists will speak in the future. Webinars have become popular among students of all sectors of science, including physics students.

The host of the International Physics Webinar and associate professor of Physics Department of Pabna University of Science and Technology, Dr. Pretam Kumar Das said, “We have organised these webinars to capture the contribution of the government in the field of education and to keep the students away from science-mindedness.”

We will take even more innovative steps to enliven physics to the students of the Department of Physics. He wished everyone a great language month and said, “I feel blessed to be able to do such a thing.”