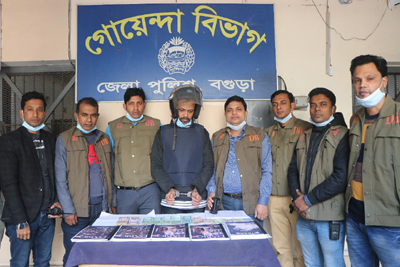 District detective police have arrested Kamruzzaman, 42, a member of the extremist or neo-JMB in Bogura. During this time a large number of jihadi books were recovered from him. Officer-in-charge of Bogura District Detective Police Abdur Razzak said this at 12 noon on Tuesday.

He was sent to court and remanded for 5 days. He was arrested from Banani bus stand in Shahjahanpur upazila at 9:30 pm on Monday. The arrested Kamruzzaman was in charge of the Baitulmal division of the JMB. He was visiting different parts of the country to raise money. He is the son of late Abdul Hafeez of Shahjadpur village under Kompaniganj police station in Noakhali district.

After the arrest, Kamruzzaman’s black bag was searched and 5 books on banned jihadi books and just terrorism and 5 books on Rafida and 7 books on Ruhiyah 12th were found. On the other hand, Tk 3 lakh 36 thousand 731 , 410 riyals of Saudi Arabia and 1 ringgit of Malaysia were found.

According to the district detective police, during the preliminary interrogation, he admitted that he was in charge of the Baitul Maal department of the new JMB. He used to travel to different districts of the country for daawati work and fundraising and has contacts with the central leaders of the new JMB.

Kamruzzaman, a member of the JMB, was sent to court for further investigation and remanded for five days.