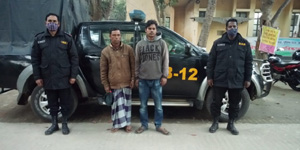 An expedition team from RAB-12, Bogra Camp conducted a raid on a paved road in front of Sabiha Traders on Rickshaw Garage Road at Tamai Bazar under Belkuchi Police Station in Sirajganj District on January 31, 2021 at 6:00 pm. Md. Abdullah Akand