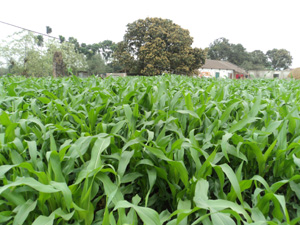 Agriculture is the main source of livelihood for most people.  One of them is rabi maize, which has recently become known as a branding product in the region.  Maize cultivation has changed the livelihood of the people of this region.

At one time people used to spend their days in misery without eating.  But in the last 25 years, the landscape has changed.  Cultivating maize in sandy soil has changed their lives.  In the villages, half-baked houses have been built instead of thatched houses.  Now they do not have to eat.

Maize is now the main cash crop in Lalmonirhat.  Maize grains are used as human food and maize plants and green leaves are used as high quality fodder.  It is also in great demand as a food for poultry and fish.

Maize farmers are weaving dreams on green leaves in five upazilas of Lalmonirhat.  Already somewhere the trees have started to flower.  Somewhere fresh trees are coming out.  Farmers tend to cultivate maize to cultivate rabi crops in less time and to use less ground water.

Several chars have sprung up on the banks of the Teesta and Dharla rivers.  Settlements have developed on that char.  Cultivation of various crops is going on.  Hatibandha upazila of the district has the highest number of chars in the Teesta.

On the other hand, Lalmonirhat Sadar Upazila has witnessed the highest number of chars.  In the heart of these chars, besides human settlement, cultivation of different varieties of crops has started.

Five chars have sprung up on the Dharla river at Mughalhat and Kulaghat in Lalmonirhat Sadar upazila.  Two of these chars have been developed settlements.  Moreover, due to drying up of Dharla, Ratna and Saniajan rivers, boro paddy cultivation as well as maize cultivation has become popular in the river.  Corn cultivation is also rampant in the Teesta river.

Farmers are expecting bumper yields in the Teesta char areas this year as the weather is favorable and there is no insect attack on maize.

Maize cultivation costs about 6-7 thousand Tk per bigha.  Besides, planting maize in potato field reduces the cost a little.  After maize, paddy and jute are also planted in that land.

According to the farmers, maize cultivation is started every six months every year.  Fertilizer and seed prices go up at the beginning of maize cultivation.  In this way, the common farmers started cultivating with huge interest from the local Dadan traders.  If the yield is good, it is good, otherwise the farmers have to sit on the road.

Meanwhile, even though the agricultural banks give loans for maize cultivation, the farmers have to suffer to get those loans.  Concerned quarters believe that the opening of a maize processing plant will ensure the price of maize in the local market as well as create opportunities for unemployed youth in the area to work there.

Besides the agriculture department, various non-governmental NGOs are working to ensure self-reliance and market for maize farmers.

Farmers in the region have cultivated maize on a record amount of land this season as well.  This time the farmers cultivate maize on almost twice as much land as in 2019.  Especially in Lalmonirhat, Patgram, Hatibandha, Kaliganj and Aditmari upazilas they cultivate most maize.

According to the Lalmonirhat Agriculture Extension Department, maize has been cultivated in 30,240 hectares of land in Lalmonirhat during the Rabi season in the fiscal year 2020-21.  The amount of land under maize cultivation has increased by about two thousand hectares in the current financial year.  Every year, farmers are giving up tobacco cultivation and turning to maize cultivation.

The target for maize production this year has been set at 30,100 metric tonnes.  Last season, about 272,000 tons of maize was produced from this region.

Afzal Hossain, a farmer in Saniajan area of ​​Hatibandha upazila, said that the yield of maize has doubled now as a result of planting improved seeds with the help of agriculture department for 20 years.  At present, about 100-140 maunds of maize is available from each acre of land and the cost is Tk.20-25 thousand.  Apart from the cost per unit, the profit is Tk. 35-40 thousand.

Shahjahan Mandal of his own Sheikhsundar village in Saniajan area said people in the area had a lot of trouble.  They had to work day and night with their families.  When maize cultivation started, the days of the people here began to change.  We have improved a lot since maize cultivation.

Rabiul Islam, a maize trader in Barakhata Bazar, said that the higher the yield of the earlier variety of maize, the higher the price.  Maize is sold at.700 to 800 Taka per maund

He added that traders from different areas including Dhaka, Kushtia and Jessore came to buy maize in the area.  So farmers also get the price of maize.

Hatibandha Upazila Agriculture Officer Omar Farooq said that farmers have to apply urea fertilizer extensively on their land during maize cultivation.  The cost of farmers will also be less as less irrigation is given due to winter in the current season.  He expects bumper maize yields across the district, including Teesta char areas.

Lalmonirhat Agricultural Extension Department Additional Deputy Director (Grain) said.  Shamsuzzaman said that there has been extensive maize cultivation in Lalmonirhat district.  Especially in the river chars there is a possibility of bumper yield of maize.  Across the district, our agriculture officers went to the field level and asked the farmers for maize cultivation